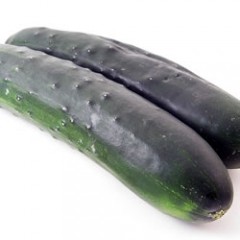 In 2014 there were approximately 1,800 acres of cucumbers grown in New York worth $10.1 million (2014 Vegetable Summary). The majority of this production is for fresh consumption, including small scale retail operations, as well as wholesale production to serve larger markets throughout the Northeast U.S. In addition to open field production cucumbers are increasingly grown inside greenhouses and high tunnels. The crop, when unhindered by pests and diseases, can provide high yields within a short harvest window. Cucumber production in New York is increasingly under threat from the foliar disease Downy Mildew (Pseudoperonospora cubensis). Thus the Cornell Vegetable Program is collaborating with partners to conduct advanced on-farm research to enhance production and marketing of cucumbers, including the development of improved varieties suited for organic agriculture. Stay tuned for more information on this project. In the meantime check out results from our variety trials and grafting work with cucumbers below.

Cucumbers are an excellent high tunnel crop for spring, summer and fall production in New York State. Grown vertically, cucumbers take advantage of the space and light offered by a high tunnel. Cucumbers grown in this environment are of higher quality with higher yields. Very fast growing and yielding, they fit into crop plans that include winter greens easier than tomatoes, peppers or eggplants.
read details

The unheated greenhouse, or high tunnel, offers a vertical production environment suitable for crops such as indeterminate tomatoes and cucumbers. As it is a soil based system however, and passively heated, greenhouse cucumbers must be transplanted later in the spring than tomatoes, due to their intolerance for low root zone temperatures. However, cucumbers can provide good returns when grown in a high tunnel, given consistent pest control and matching variety performance with market demand. A variety trial of four greenhouse cucumbers was established in a cooperating high tunnel in the spring of 2011.
read details

Buckwheat Strips as an Attractant of Pollinators for Vine Crops

Download a report on using buckwheat strips to attract native pollinators to vine crops (2008). This project was funded by the Organic Farming Research Federation.
read details

Soil based greenhouse and high tunnel production of vegetables has risen dramatically in New York recently. This season extension technology offers farmers an opportunity to target market price peaks and capitalize on rising demand for locally grown produce. Considerable attention has been given, justifiably, to tomatoes in these settings. Trials by the Cornell Vegetable Program confirm that cucumbers can also be grown at a profit in tunnels.
As production continues in the same soil beds, risk of root-zone diseases and soil nutrient deficiencies increase. Grafting, the combination of two separate cultivars into one plant, could be a solution to these challenges. Evaluations of grafted tomato by the Cornell Vegetable Program revealed several advantages. This project endeavored to graft cucumbers onto a fig leaf gourd (Cucurbita ficifolia) for increased yields and cold hardiness.
read details