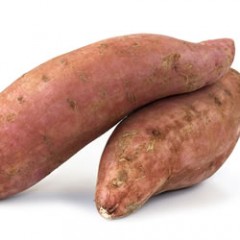 Although sweet potatoes have been grown in New York, they have received much more attention in the last couple of years due to the value of the health benefits it offers. Even though acreage is not normally recorded, we estimate that there are over 200 acres of sweet potatoes being grown throughout NYS. However, due to the long growing season that is required (100 days plus), they are generally produced on raised beds mulched with black plastic. Orange skinned, orange fleshed types are the dominant types grown here, but there are also white skinned, white fleshed and orange skinned, white fleshed varieties grown in the state. Sweet potatoes have also gained popularity with organic producers to replace winter squash production due to the fact that they have almost no disease or insect problems when grown here and can be stored longer then winter squash in many cases. The increase in winter farmer's markets or winter CSA shares has also increased sweet potato production in NY. However, deer and mice can be major vertebrate pests of sweet potatoes. Variety trials, plant density research and the use of floating rowcovers for increased production are being evaluated in the Capital District region of NY.

Improving the Quality and Yield of Sweet Potatoes in New York: 2010 Results

The Capital District Vegetable and Small Fruit Program is actively researching how to improve the yield and quality of sweet potatoes grown in NY.  In 2010, 6 different varieties, IRT vs. black plastic and different spacing configurations were evaluated.  See the full pdf file for the full report.
read details

Improving the Quality and Yield of Sweet Potatoes in New York: 2011 Results

No upcoming events at this time.