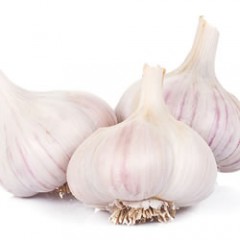 Garlic production has increased significantly in New York over the last few decades, and garlic is now considered to be an important niche crop. In 1992, only 11 acres of garlic were reported in New York, but by 1997 the number grew to 153 acres and by 2007 it again doubled to 306 acres. Garlic is currently estimated to be a $20 million dollar crop. New York is the fifth largest garlic producing state in the country, and ten percent of all New York vegetable farms report growing garlic. That is a higher percentage of growers than for broccoli, cabbage, carrots, lettuce, or onions.

Garlic is sold at farmers' markets from mid-summer to the fall throughout the state. Garlic is also sold at festivals which take place throughout the Northeast from August through October. New York's largest festival is in Saugerties, in September. Festivals are important outlets for growers and important agrotourism events for the cities that host them.

Varieties of garlic grown in New York tend to be different from those you will find in the grocery store. New York is known for excellent 'hardneck' garlic, which has a hard stalk running through the center of the bulb. The flavor of our hardneck garlic is often considered to be stronger and more unique than the flavor of 'softneck' varieties found in the grocery store and grown primarily on the West Coast or in China.

The results of two years of research (two trial locations per year) on effect of applied nitrogen on garlic yield are summarized in this article. Different rates of spring-applied nitrogen and seed size are taken into consideration, as well as plant tissue and soil analyses for nitrogen. In eight side-by-side comparisons, we never saw a yield response between 50, 100 and 150 lb/A of applied nitrogen.

The 2019 Garlic School featured final results from a 2-year study which focused on understanding and managing Fusarium disease of garlic. CVP Specialists, Christy Hoepting and Robert Hadad participated in this project, along with Dr. Frank Hay, Plant Pathologist at AgriTech, and CCE Vegetable Specialists, Crystal Stewart (ENYCHP) and Sandy Menasha (CCE Suffolk Co.). Presentations from the meeting are now available!

On-Farm Cold Storage of Fall-Harvested Fruit and Vegetable Crops is an in-depth look at the planning and designing cooling for late season and winter storage but it also is useful for general cooling as well. This was written by Scott Sanford, Distinguished Outreach Specialist, UW-Extension, and John Hendrickson, Outreach Program Manager, Center for Integrated Agricultural Systems, University of Wisconsin-Madison.

White rot is a worldwide problem in allium production, and has resurfaced in the New York garlic industry after a long period of eradication. Positive samples were collected in 2016 from the Hudson Valley, Central and Western New York, indicating that the disease is widespread. As with other soilborne diseases, white rot can be persistent and devastating. However, careful management can reduce inoculum, and because the disease is spread by seed and soil, it is also possible to prevent its spread into uninfested ﬁelds.
read details

Garlic Production in the Northeast (from NOFA NY's Winter Conference, 2015)

If leaves aren't the best indicator of maturity, how else can you tell?
read details

Leek Moth was detected in four home gardens in Plattsburg, NY in 2009. It was first detected in Ontario, Canada in 1997 where it has become problematic especially to small-scale, organic growers in eastern Ontario and to commercial producers in western Quebec, who have limited insecticides available to them.

Leek Moth continues its spread to more farms and gardens across the U.S., a new comprehensive website is available to aid in the identification and management of this pest. This Cornell website features maps of the distribution of leek moth, protocols on insect monitoring and identification, best management practices for farms and home gardens, a photo gallery of damage symptoms and a comprehensive resource section.

Garlic fertility and weed control recommendations for March through May.
read details