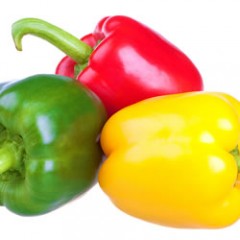 Bell, or sweet, peppers are an important crop on New York fresh market vegetable farms, worth in aggregate close to $10 million according to the most recent data (2011 Vegetable Summary). Hot peppers, such as jalapenos and habaneros, can be important specialty items for direct sales. Peppers are grown in commercial fields with floating row covers, plastic mulch and drip irrigation. For colored peppers early maturing varieties are a good choice for NY growers. Resistance to the soil-borne pathogen Phytothphora capsici is another important attribute. Greenhouse and high tunnel production of peppers is on the rise among CSA, produce auction and market farmers. The Cornell Vegetable Program conducts a number of research projects on peppers such as variety trials and organic fertility.

This reference sheet lists the herbicides that are labeled for peppers in New York and which species are controlled, as well as other important considerations and photos of weeds. While this is a handy references, it is critical to read the product labels thoroughly.
read details

The peppers evaluated in 2011 performed very similar in total yield per plant as measured by pounds. When we look at fruit size and weight we do find differences that can help growers make choices in variety. When selling by the piece, in a retail setting, varieties such as Yellow Crest would work well. For wholesale accounts varieties such as Gordo will fill bushel boxes faster. Sandpiper, a slightly smaller fruit than the other bell peppers is this trial, gave very good yields and offers a nice color spectrum. High tunnels are a great tool for vegetable growers to increase quality and color of bell peppers. Total economic performance per square foot is much less than tomatoes. However, labor inputs are also lower. Although not a perfect rotational crop with tomatoes, peppers are not a host for Fulvia Leaf Mold, and are less likely to harbor Two Spotted Spider Mites. We encourage growers to consider peppers in high tunnels for increased quality and yield.