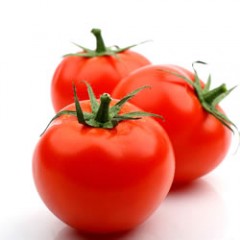 In 2014 Empire State farmers planted 2,800 acres of tomatoes for an estimated value of $24.0 million (2014 Vegetable Summary). Most field production is devoted to determinate cultivars, with plastic mulch, drip irrigation and stake-and-weave trellis essential production elements for early and quality yields. Greenhouse (and high tunnel) production is on the rise in New York with structures of less than 1/10th to in-excess of 40 acres under protection. Indeterminate, greenhouse lines, as well as heirloom varieties are grown under protected culture. Tomatoes are a popular crop with New York fresh market vegetable farmers due to high demand and fair prices. The Cornell Vegetable Program conducts a number of research projects each year addressing improved tomato production. Check out the links below to learn more.

If late blight is detected or suspected on your farm, and you cannot get a sample to a Cornell Vegetable Program staff member in a day or two, you should submit your sample to Chris Smart's lab at Cornell. Instructions for reporting and sampling are provided.

Last Modified: December 2, 2015
One of the first choices when beginning high tunnel tomato production is the type: determinate or indeterminate. Differences in the growth habits, nutritional needs, disease resistance, and fruit attributes of determinate and indeterminate tomatoes will influence the types and varieties a grower will choose.
read details

Tomatoes for the High Tunnel: Determinate versus Indeterminate

One of the first choices when beginning high tunnel tomato production is variety selection. This comparison guide will help with the decision.
read details

Grafting Tomatoes Video: The Motivation and Benefits of Grafting

As soil based production of tomatoes continues in tunnels and greenhouses, risk of root-zone diseases, insects and nutrient imbalances increase. Grafting, the combination of two separate cultivars into one plant, is one management approach to these challenges. Learn more about the motivations and benefits of grafting tomatoes in this video of Judson Reid, Extension Vegetable Specialist for the Cornell Vegetable Program.
read details

How to Graft Tomatoes: An Instructional Video and Factsheet

The % LB diseased foliage in a field significantly affects how well any fungicide works against it. On September 16, 2013, Bill Fry, Cornell said, "Years ago we did experiments on the effect of timing of Ridomil on the suppression of LB [on a sensitive LB strain]. The treatments included metalaxyl/Ridomil, mancozeb, or no fungicide. We initiated applications at ~0.5% disease or at 2-5% diseased [foliage]. The effects of Ridomil were apparent within a day or two, but the effects of mancozeb were not visible for at least one week. LB increased explosively in the mancozeb and untreated plots for the first week. Subsequently, mancozeb did slightly suppress disease relative to the water control. The effect of Ridomil was dramatically different with an immediate observable effect in [reducing disease development]. Nonetheless, the amount of disease in the Ridomil plots continued to increase gradually for the next four weeks. When we initiated Ridomil applications at 0.5% disease the final level of disease was less, and the rate at which disease increased was less, than when we began at 2-5% diseased foliage. There was inoculum from other plots that probably contributed to increased LB. Thus, once disease is established, it's really difficult to totally stop this pathogen. I suspect that given the wet weather and favorable conditions we've had recently, any fungicide may have been challenged."
read details

Grafting of Tomatoes for Soil-based Production in Greenhouses & High Tunnels

In 2012, the Cornell Vegetable Program conducted trials of grafted cucumbers and tomatoes. We grafted 2 tomato scions (Panzer and Big Dena) onto 3 different rootstocks (Arnold, Colossus and Maxifort). We also grew out ungrafted control plots for comparison. Tomatoes were grafted using the 'tube-graft' method. Detailed information on our materials and methods can be found in the full report.
read details

Although this new pest in gaining attention from berry growers, it is also a threat to tomatoes.  Spotted wing Drosophila (SWD) lays eggs in ripe or maturing fruit with a rear-end that favors a miniature hack-saw. The eggs, which have creepy breathing tubes, hatch out into nasty worms that feed inside the fruit creating a liquefied mass. Reports on tomatoes mention organic, heirloom and high tunnel crops. A common theme to these observations is that insecticides are generally absent. SWD has been reported in 2012 throughout the state, so far in traps and fruit plantings (see map courtesy of Hudson Valley Fruit Program). Likely there are unreported cases of infested tomatoes.
read details

Why Aren't My Tomatoes Ripening?

With all of the hot weather we have experienced this summer, growers were expecting their tomatoes to ripen very quickly. Unfortunately, just the opposite is happening. Ripening seems very slow, almost like what we see in the autumn when temperatures are much cooler.
read details

High tunnel tomatoes continue to grow in popularity with New York vegetable growers for disease control, earliness and fruit quality. Variety selection is one of the most important management decisions for tunnels. The decision between determinate and indeterminate varieties depends on grower preference and market demand. Total yield must be balanced with fruit quality and disease resistance
read details

Depending on the crop, nightshade can reduce crop yields, harbor diseases, and cause crops to be rejected by processors. Learn about the species of nightshades in NY, physiological differences between them, emergence and growth information, and control strategies.
read details

Although Cornell Vegetable Program research from 2009 showed a net positive impact of hanging baskets of petunias on tunnel economic performance, tomato yields were decreased. In 2010 the project team repeated research in an unheated high tunnel, representing a dramatic decrease in fuel inputs compared to a heated greenhouse for hanging baskets. A lower density treatment was used, compared to 2009, and light intensity data was collected. Risks of shading an in-ground tomato crop and spread of insects and diseases between the flowers and vegetables were investigated.
read details

Grafting of Tomatoes for Soil-based Production in Protected Culture

Last Modified: April 15, 2010
Soil based greenhouse and high tunnel production of tomatoes has risen dramatically in the Finger Lakes Region within the last 5 years. This season extension technology offers farmers an opportunity to target market price peaks and capitalize on the rising demand for locally grown produce. Tomatoes from these protected culture systems have proven profitable in wholesale auction settings as well as farmer's markets and CSAs.

As production continues in the same soil beds, risk of root-zone diseases and soil nutrient deficiencies increase. Grafting of desirable fruiting varieties onto vigorous, disease resistant rootstock has become a standard production technique in hydroponic facilities throughout the world. This project seeks to evaluate the potential of grafting for small scale farmers in New York and demonstrate its advantages.
read details

No upcoming events at this time.

Is there an opportunity for New York growers and marketers to invest in broccoli production and distribution as a way to diversify and strengthen their businesses, while adding jobs, dollars, and resilience to the economy and rural communities?