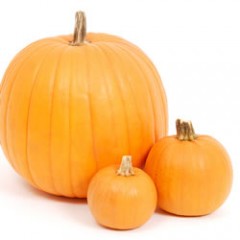 New York State ranks among the top 3 states (Illinois and Pennsylvania are the other two) in pumpkin production in the country with over 5,500 acres of production with an estimated value of $20.5 million each year (2014 Vegetable Summary). Nearly all of these are for fresh market use for either decorating or eating. The pumpkin industry is highly variable with fruit ranging from quarter pound to several hundred pounds each. Pumpkins are grown throughout NYS and are marketed through roadside stands, nursery centers and farmers markets and are also important in areas that have lots of agri-tourism. Included in this group are also other fall ornamentals such as gourds and ornamental squash. Pumpkins are susceptible to many different diseases, the most prevalent of those being Powdery Mildew, Downey Mildew and Phytopthroa blight. In the last eight years, plant breeders and seed companies have released a multitude of varieties resistant to Powdery Mildew and are widely used by growers. Another concern for growers are several different viruses which can cause plants to not produce fruit at all or results in poor fruit quality (size, color etc.). Striped Cucumber Beetles and Squash bugs remain the main insect pests. Aphids are also important because they are the primary vectors of those viruses mentioned above.

Reliance on wild bees for pumpkin production is potentially risky, but costs of supplementing fields with managed bees is increasingly expensive. Pollination service costs can be reduced by identifying scenarios, based on the background level of wild bees and attributes of the surrounding landscape, where supplementation might not be necessary. This decision-making guide will help determine scenarios where reliance on wild bees will likely provide sufficient pollination of pumpkins.
read details

Ideally, pumpkins should be harvested when fully mature, with a deep orange color and hardened rind. However, as long as pumpkins have started to turn color, they will ripen off the vine if held under the proper conditions. While not ideal, this may be preferable to leaving them in the field if conditions are not favorable.
read details

The Capital District Vegetable & Small Fruit Program evaluated current herbicides and one un-labeled herbicide for pumpkins. Weed control ratings and the cost associated with each prodcut can be found in the the full pdf.
read details