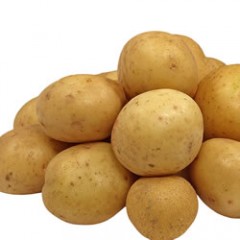 Potatoes are grown all across NYS, though the largest farms tend to be located in Western NY, the Finger Lakes Region and on Long Island, on deep, fertile, light- to medium-textured mineral soils, and on muck (organic) soils. Potatoes are grown on small, medium and large farms, for retail, wholesale (east of the Mississippi) and organic markets, for both fresh market and processing into chips, and for certified seed potatoes. Most growers store some of their crop for winter sales. Varieties include round whites, red-skinned potatoes, yellows, and a smaller acreage of a wide variety of specialty types, such as those with blue or red skin and flesh, fingerlings, etc. Potatoes are one of the highest value vegetables in NY, grown on 16,000 acres, with an average value of about $54.9 million recently (2014 Vegetable Summary).

Potatoes have many serious insect and disease pests. Late blight can be a devastating disease, capable of completely destroying an unprotected crop within 3 weeks in wet weather, and rotting the tubers. Late blight was the major cause of the Irish Potato Famine. It also affects tomatoes. New, more virulent strains of late blight fungus began showing up 20 years ago and the disease has been harder to predict and control ever since. Early blight is a common fungal disease on both potatoes and tomatoes which survives over-winter in the soil. Colorado potato beetles can cause serious defoliation if crops are not rotated up to a quarter mile from where they, tomatoes or eggplant were previously planted. They can rapidly become resistant to commonly used insecticides. Tiny, sucking leafhoppers move up from the south each June on weather systems, and can cause severe leaf burn and yield reduction. Aphids can also be a production problem as well as carrying viral diseases that can affect potatoes grown from saved seed.

This year, the Cornell Vegetable Program planted a potato variety trial focused on commercially available fresh market potato varieties, with the small-scale potato grower in mind. This trial allowed us to test different varieties of potatoes that might be of interest to consumers at farm markets and see how well they perform in a western NY climate. In this overview, we share overall yield results from the trial as well as some details on some stand out varieties.

If late blight is detected or suspected on your farm, and you cannot get a sample to a Cornell Vegetable Program staff member in a day or two, you should submit your sample to Chris Smart's lab at Cornell. Instructions for reporting and sampling are provided.

The 2017 NYS Certified Seed Potato Crop Directory is now available. There is a wealth of information on NYS potato seed certification, as well as on the varieties grown for certification in 2017.
read details

Best Management Practices for Dickeya in Potato Production in the Northeast

Potato seed tubers harboring Dickeya dianthicola are the only confirmed source of this pathogen. It does not appear to be able to survive in soil (including in crop debris) from one growing season to the next. Consequently, rotating with a non-susceptible crop is not a necessary component of the management program. Best management practices listed in the PDF are encouraged to minimize potential losses from Dickeya.
read details

The emergence of Potato Virus Yntn, which causes tuber necrotic ringspot disease (TNRD) in susceptible varieties, and the emergence of blackleg Dickeya, both serious seed-borne diseases, are very important reasons why you need to get a copy of the North American Certified Seed Potato Health Certificate (NACSPHC) for each lot of potato seed you buy.
read details

Canadian and European Varieties for the Fresh Market

A seven page color fact sheet on the Diagnosis and Management of Potato Storage Diseases is now available online from the University of Idaho. The diseases covered are those which NYS potato growers often find themselves dealing with: pink rot, Pythium leak, late blight, Fusarium dry rot, bacterial soft rot, silver scurf, black dot, and early blight. In addition to assisting with the proper identification of the diseases, there is information on sanitation of equipment and the storage, and recommendations on how to hold lots with some disease if you can't sell them immediately.
read details

The % LB diseased foliage in a field significantly affects how well any fungicide works against it. On September 16, 2013, Bill Fry, Cornell said, "Years ago we did experiments on the effect of timing of Ridomil on the suppression of LB [on a sensitive LB strain]. The treatments included metalaxyl/Ridomil, mancozeb, or no fungicide. We initiated applications at ~0.5% disease or at 2-5% diseased [foliage]. The effects of Ridomil were apparent within a day or two, but the effects of mancozeb were not visible for at least one week. LB increased explosively in the mancozeb and untreated plots for the first week. Subsequently, mancozeb did slightly suppress disease relative to the water control. The effect of Ridomil was dramatically different with an immediate observable effect in [reducing disease development]. Nonetheless, the amount of disease in the Ridomil plots continued to increase gradually for the next four weeks. When we initiated Ridomil applications at 0.5% disease the final level of disease was less, and the rate at which disease increased was less, than when we began at 2-5% diseased foliage. There was inoculum from other plots that probably contributed to increased LB. Thus, once disease is established, it's really difficult to totally stop this pathogen. I suspect that given the wet weather and favorable conditions we've had recently, any fungicide may have been challenged."
read details

Late blight, caused by Phytophthora infestans (Mont.) de Bary, and pink rot, caused by Phytophthora erythroseptica Pethybr., are two devastating potato tuber diseases. These pathogens regularly cause storage losses in potato production systems. While these pathogens, especially P. infestans, spread rapidly in the field, there can also be substantial tuber-to-tuber spread during mechanical harvesting and tuber transfer procedures. With these diseases present in the field, storage losses well beyond what would be expected can occur based on the pathogen level in the field. Learn more about how to control diseases following potato harvest in this University of Maine Extension publication.
read details

Depending on the crop, nightshade can reduce crop yields, harbor diseases, and cause crops to be rejected by processors. Learn about the species of nightshades in NY, physiological differences between them, emergence and growth information, and control strategies.
read details

Download a report of field plot strategies for using buckwheat strips to attract beneficial insects for the control of Colorado potato beetle in potato production (2009/2010). This project was funded by the Organic Farming Research Federation.
read details